Last year was the first time I embarked on a journey of discovery in my reading life. In addition to keeping track of what I was reading – I went from being a random voracious reader to being a more organized and intentional, but still voracious reader. I also actively sought out new book releases and along the way discovered and celebrated new authors.  I entered 2018 with renewed vigor building on the strength of the lessons learned from 2017 and realizing that life would have me doing things a little differently.  The quarterly reading updates replace the monthly reading lists, and because I am yet to be cured of the malaise of reading more than one book at a time, prepare to be treated to a rich potpourri of choice reading materials- from all genres of fiction to the slight smattering of non-fiction and along the way, my endless reading list keeps growing. As I write this on the second day of the fourth month of the year I have read a total of 12 books, some which had been on my reading list for a bit and some which recently made their way on to the list and kept me company for quite a bit. Educated by Tara Westover. The first piece of non-fiction that I started to read this year and what a captivating read it was. One of the factors that makes Ms. Westover’s memoir all the more powerful that it is not a made-up-tale, she lived through all of the events in the book and it is a true testimony of the power of endurance in pursuing one’s destiny in the face of insurmountable odds.  My favorite passage from the book:

…but in that moment I knew I could not choose it for myself. Everything I had worked for, all my years study, had been to purchase for myself this one privilege: to see and experience more truths than those given to me by my father, and to use those truths to construct my own mind. I had come to believe that the ability to evaluate many ideas, many histories, many points of view, was at the heart of what it means to self-create. If I yielded now, I would lose more than an argument. I would lose custody of my own mind.

Petit Pays by Gaël Faye. Sometimes a book comes along that makes you tumble hopelessly in love with reading and language, no matter how emotionally searing the story is. Jamie Craig best describes it:  “That moment when you finish a book, look around, and realize that everyone is just carrying on with their lives as though you didn’t just experience emotional trauma at the hands of a paperback.” This rung true for me in some many ways by the time I was done reading Petit Pays especially since I read it in French and I felt oddly out of place in my anglophone community. The interesting and beautiful thing about this book, is that I discovered it simply by accident. At the start of the year, I made a decision to introduce more contemporary French literature to my reading list et puis voilà. I am counting down until the English version of this book is released this summer. Readers in the U.S., should watch this space for a potential book giveaway when the time comes. Life of Pi by Yann Martel. I had had this book on my reading list for a very long time. It was around the time that the movie was coming out and everyone was talking about it and that’s the thing about me, if everyone is talking about a book, there is a strong chance that I will not read it right away until all the noise dies down. My twelve-year-old read the book last year and even wrote a book report on it, which I could not review because I did not want to encounter any story spoilers. I read the book in two days because I had to watch the movie within a certain time period. As is always the case, the book is so much better than the movie, if only because my visceral fear of large cats made it harder to focus on a movie where a large cat played such a prominent role but also for a chance to read scintillating language like this.

The reason death sticks so closely to life isn’t biological necessity – it’s envy. Life is so beautiful that death has fallen in love with it, a jealous possessive love that grabs at what it can. But life leaps over oblivion lightly, losing a thing or two of no importance, and gloom is but a passing shadow of a cloud. An American Marriage by Tayari Jones. Ms. Jones’ book is one of two books that I have received from dear friends at Book of the Month Club. My next blog post will be extolling the virtues of these fine people and how I have enjoyed having them in my life. So, the truth is and this is quite a contradiction from what I say about Yann Martel’s book, I got An American Marriage because everyone was talking about it and the synopsis was pretty fascinating, but, I really had not planned on reading it until later in the year. But one thing led to another and I started on the first page (it always starts with the first page) and then I could not put it down and so I read it to the very end and I am glad I did.

I told myself that the story wasn’t like a carton of milk: it wouldn’t go bad if I kept it to myself for longer. The truth would remain true for a week, for a month, for a year, ten years, however long it was before I felt like talking to Big Roy about Walter, if I ever did. Eleanor Oliphant is Completely Fine by Gail Honeyman. The first thing that drew me to the book was the title. An affirmative sentence like that made me wonder who Eleanor Oliphant was and what possible reasons could exist in the universe that would prevent her from being completely fine. The second Book of the Month Club book that I have devoured this year.

This was my first dress since childhood, and it felt strange to have my legs on public display. She tried to steer me toward vertiginous heels again – why are these people so incredibly keen on crippling their customers? I began to wonder if cobblers and chiropractors had established some fiendish cartel. A Wrinkle in Time by Madeleine L’Engle. I have always found it interesting that this book which was written more than 50 years ago is an all-time favorite of readers of all generations including my twelve-year-old child. I knew I had to read it before the movie came out and… I. Am. So. Glad. I. Did. For those who are wondering what do, may I kindly recommend that you skip the movie and read the book, something tells me you will be glad you did. Still Me by Jojo Moyes. I have a special place in my reading heart for the writing of Jojo Moyes and I am particularly partial to the character Louisa Clark who we are first introduced to in Me Before You.  So when a new book was released featuring the delightful Ms. Clark – this will be third in what we call the Me Before You series, I set everything aside and dove right in. More so, because Ms. Moyes decided to bring Louisa state-side and what a whirlwind adventure she gets into as only she can.

Waking Lions by Ayelet Gundar-Goshen. Crime, lies and betrayal intersect in this bold narrative which I was drawn to because of its portrayal of migrants of African descent in Israel. An absolutely engaging yet somewhat dark read.

These last four books are carryovers from last year – I started reading them in 2017 and finished them in 2018 so technically they count as 2018 reads. I found Isabel Allende’s In the Midst of Winter, a rather disappointing read and actually struggled to finish it, as I did Julia Fierro’s The Gypsy Moth Summer, which started off as a fierce read but then started to lose me in the middle and left me rather deflated at the end Curtis Wiklund is a graphic artist with a strong Instagram following and the I really enjoyed the journey he illustrates in The Daily Drawings of Us which is an intimate portrayal of how life unfolds for him and his wife. Smart, witty and heartwarming. Alexis Okeowo had earned my respect when I discovered her writing in The New Yorker magazine. She distinguished herself with writing about contemporary life in African cities with bold pieces like: West Africa’s Most Daring Designer. A Moonless, Starless Sky. Ordinary Women and Men Fighting Extremism in Africa, was not an easy read but it was a necessary one especially given the way Ms. Okeowo carefully gives a voice to the voiceless yet retaining the originality of their stories. 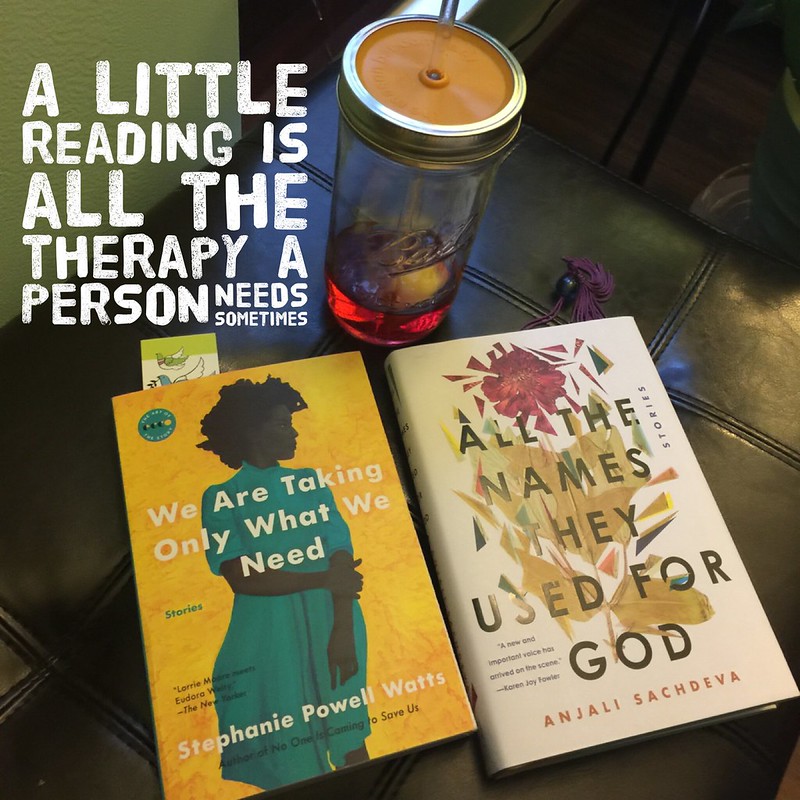 Those who know me well know that short stories remain my first love when it comes to reading and writing and after having had the first three months completely devoid of any short story collections, I am starting to compensate with one but two as my two current prominent reads are: Stephanie Powell Watts’ We Are Taking Only What We Need and Anjali Sachdeva’s All the Names They Used for God. The near future will see me reading Dave Eggers’ The Monk of Mokha, Uzodinma Iweala’s Speak No Evil and Tomi Adeyemi’s Children of Blood and Bone (the latter if my twelve-year-old does not get to it first).

And since we are in the month of April, it is only proper for me to highlight some of the books being released this month which I have added to my reading list: two collections of short stories: Heads of the Colored People by Nafissa Thompson-Spires and You Think It, I’ll Say it by Curtis Sittenfeld (whose writing I discovered in the New Yorker magazine: Show Don’t Tell),  and then there is The One Who Wrote Destiny by Nikesh Shukla, a lot of people are talking about America is Not the Heart by Elaine Castillo, something tells me I will be reading the French version of of Waiting for Tomorrow by Nathacha Appanah and I am fascinated by the synopsis of Every Other Weekend by Zulema Renée Summerfield  but my main April book to look out for is The Girl Who Smiled Beads: A Story of War and What Comes After by Clemantine Wamariya and Elizabeth Weil and you will hear more from me about this one. I may end up reading a lot more non-fiction this year than I have in previous years, we’ll see.

Happy Reading to all!

Book of the Month: Celebrating the Magic of Books