I was so pleased and super-excited to attend the 2017 Association of Writers & Writing Programs (AWP) conference this past week in Washington D.C. It felt really good to be among my tribe of writers and readers. Juggling full-time work and a part-time writing career has its modest challenges but when there is a will, there is most definitely always a way. So I found myself, darting through downtown D.C., in the middle of the day, catching taxi cabs from work and to the conference – to participate in sessions, listen to speakers, meet new writers and discover potential new haunts – the Center for Fiction in New York is now on my list of places that I would like to visit when next I am in NYC. Although, I was not able to attend as many sessions as I would have liked, I have to admit that the two half-days that I did attend, were most definitely worth my while.

I scored an advance copy of Mohsin Hamid‘s new book: Exit West. Late last year, I had read excerpt in the New Yorker (more here) and it has been one of my highly anticipated books of 2017. 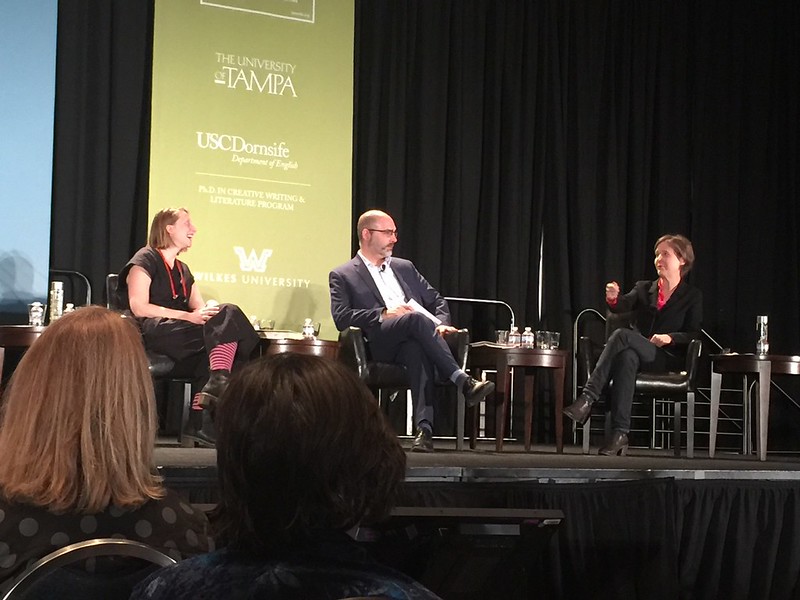 Ann Patchett reads from Commonwealth from Jola Naibi on Vimeo.

I discovered a new author – Emma Straub. I have to admit (a little shamefully) that I had never heard of her until I attended the conference. Google remained a loyal friend, as was free wi-fi and I was fortunate to sit beside an adoring fan – Robbie. All those combined to inform and convince me that I should be reading her books and I will be.

She read from her recent book Modern Lovers.

In presenting together, Mses Patchett and Straub  treated the audience to an easy camaraderie. It was almost like we were eavesdropping on a girls’ night out. The session moderator was the Center for Fiction’s Jon Michaud and he did a fantastic job in guiding the discussion. One of the things that both authors have in common is that they are both independent bookstore owners . Ms. Patchett owns Parnassus Books in Nashville, TN.  and Ms. Straub will be opening an independent bookstore in Brooklyn NY. More here.  I hope to keenly follow these footsteps one day.

Of Parnassus Books, the Commonwealth author shared how it served as a local sanctuary for many people during the days following the outcome of the November 2016 election as many sought a way to stave off pangs of disillusionment.

On balancing the writing life and family life, Ms. Straub, who has a young family admits to being content with having seven seconds of silence at her computer, while Ms. Patchett shared the ‘Four Burners Theory’ which goes:

On whether their lives are reflected in their writing, Ms. Patchett – who has shared that Commonwealth is perhaps her most autobiographical work said: “Fiction is a way that we can play out an alternative life”. She is currently working on a story about a woman who is utterly repulsed by wealth. 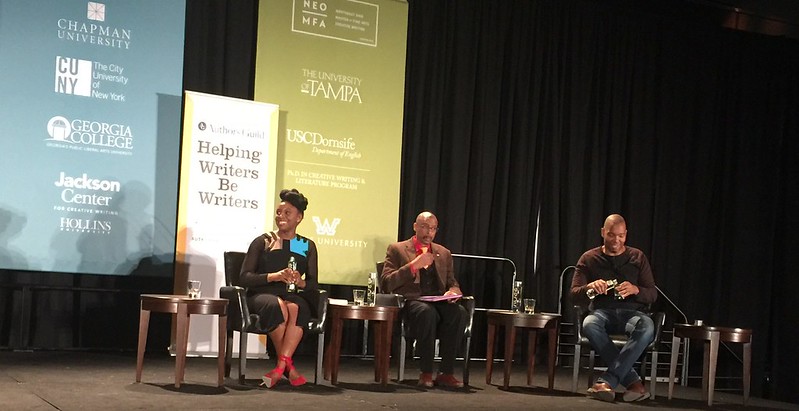 Next, E. Ethelbert Miller moderated a discussion between Chimamanda Ngozi Adichie and Ta-Nehesi Coates, preceded by a reading by both authors. Mr. Coates read from some of his new work

The conversation was centered on identity and a statement attributed to the late Amiri Baraka: “Which is worse being taken from the land or having the land taken from you?  Ms. Adichie accurately pointed out that the African-American identity did not originate on a slave ship. She also also paid homage to the late beloved Buchi Emecheta.

As I exited the conference hall and into a blustery D.C. evening, feeling exhilarated, I came across this kind and gracious man whose sign was a gentle reminder that, when it comes to immigration, the only thing that separates  many of us in the United States, is time. 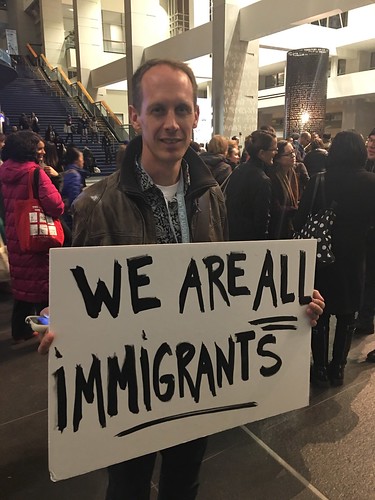